Earlier this week @Agentoflolla leaked a large chunk of the (FAKE) lineup for this year's Lollapalooza.  Another user known for leaking all things Lolla on twitter, @thelollaleaker, was already leaking the lineup, but @agentoflolla posted the image of the lineup seen below. 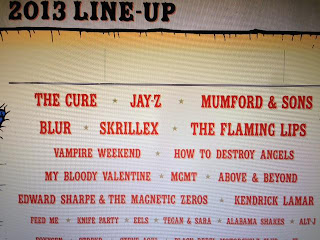 The leaked lineup has lost a lot of credibility since Jay Z announced his tour dates.  But as we said before this was FAN MADE and should not be taken seriously.

Artists below are part of the real lineup and are supported with evidence(click them for the link to evidence).

If the list is accurate there are some serious heavy weights about to descend upon Lollapalooza this year.   With more and more EDM festivals coming to the Chicagoland area this could reveal who is and isn't playing other festivals.  Some great artists are going to be at Lollapalooza this year that is for sure.

However, please note last year this was all a big hoax (see article from @lollaleaks on tumblr; link).  The user @lollaleaks, aka Brynrich, said last year, "I’ve been fucking with you this whole time".  So take this list as it is, speculation from someone not affiliated with the festival.  Hopefully, this year Perry Farrell won't get as upset as he did last year.....

UPDATE:  The original user responsible for @lollaleaks, brynrich, has been active on the Lollapalooza forums and he might be behind the latest string of leaks and announcements again.  Check out the forums here 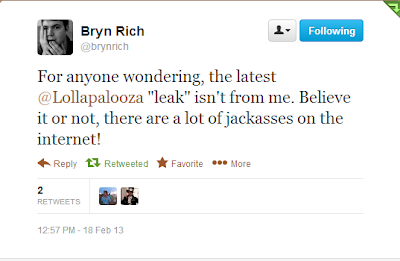 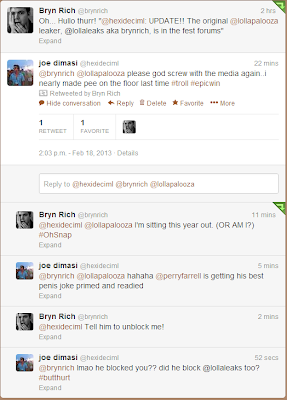