Earlier last week a screen shot of a supposedly leaked Electronic Daisy Carnival(EDC) Chicago lineup started to circulate around the Internet.  This is the first year Insomniac has brought EDC to Chicago.  The festival will take place May24-26 at the Chicagoland Speedway.  However, this lineup was quickly shot down by Deadmau5, aka Joel Thomas Zimmerman, on his twitter account, @deadmau5.  Link

The artists included on the fake list include:
Tiesto 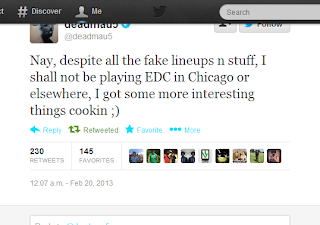 
Unfortunately this lineup is not real and given other tour dates and stops around Chicago Carl Cox(playing The Mid Chicago March 8) is probably not going to be there and the same for Fedde Le Grande(he is playing at The Mid March 07) for the Road to Ultra Tour
at 10:33 AM